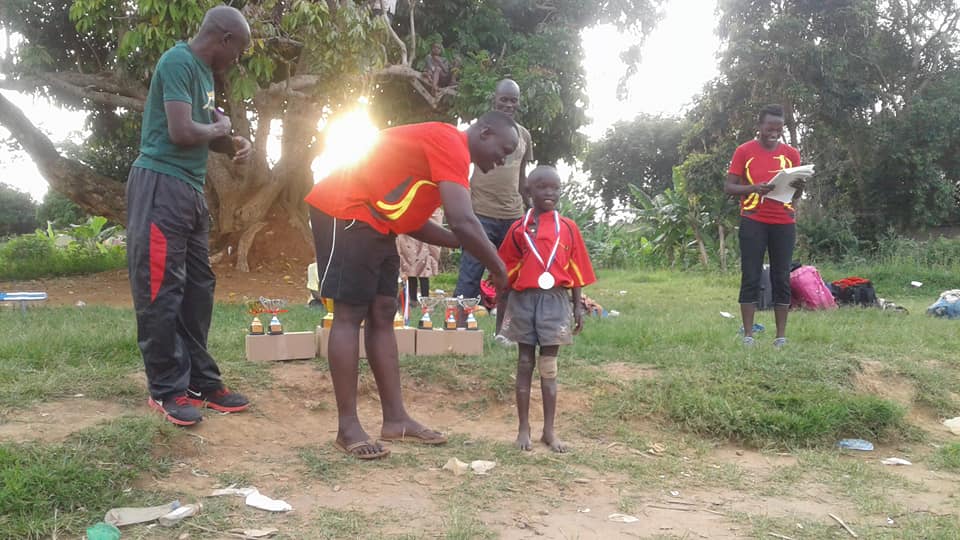 The whole world seems to be getting ready for Xmas and so are we. But first things first, read on for the December 10th Entebbe tournament that offered some great Rugby, life skills education, medical training and more Rugby!

Rugby Tackling Life (RTL) held a women’s 7s tournament on 10th December at the Entebbe Mongers’ “House of Pain” home ground (Entebbe Secondary School playground). Six women’s teams from the Eastern, Northern and Central regions participated – Apac Tigers, Black Panthers (from Legends in Kampala), Busia Lady Rhinos, Kitgum Queens, Lira Matrix and Walukuba Titans (from Jinja).
The day started with a life skills education session conducted by RTLs Emmanuella Oroma with about 80 girls and women aged between 12-33 years.  The session was interactive and the players responded positively to it with many asking questions and also offering their opinions on the various topics.  Additionally, Uganda Rugby Medical Society’s (URMS) Nelson Mayeku, trained medics from Apac, Kampala, Kitgum and Lira in pitch side rugby care prior to the tournament and worked together with them throughout the tournament.  The medics had a busy day and had a lot of hands on experience such that they will be able to  pass on their knowledge to other medics in their respective regions and also be able to handle injuries during Rugby events. Each team played 5 games in a round robin format.  Walukuba Titans won all their games and were crowned the 2017 RTL women’s 7 aside champions. Do you like what you are reading and thinking what we do is the way forward? Kristin Kvalvik, from Norway, was RTLs had a special guest that day.  She had spent the week finding out how RTL functioned and meeting beneficiaries of the RTL programme.  Apart from donating rugby training gear to RTL she also featured for Black Panthers during the tournament.  Kristin has promised to visit Uganda again and we look forward to seeing and working with her in the future.
It is essential for us at Rugby Tackling Life to develop partnerships with players, coaches, teams etc who are willing to come to visit us in Uganda. Yes, we always need financial support BUT we also need quality manpower that can teach and train and make us better in what we do!
Thank you to everyone who ensured the Entebbe tournament turned out to be a fantastic tournament!

A great year. Merry Xmas to all of you.
We wish you all a great time. Be merry and happy.
Do not come up with 2018 resolutions. Be content. You know what you have to work on day by day no matter which year! Continuously ask yourself: Is this the best version of me? Is this who I want to be?
Lots of love.